One of the most remarkable seasons in NHL history continues its march to the finish line. The Vegas Golden Knights refuse to bow to convention that dictates expansion teams struggle in their first season as they challenge for the Presidents’ Trophy for most points in the league.

It would be a fitting tribute in this, the 50th-anniversary season of the first great NHL expansion, when the Original Six welcomed a half-dozen new teams – the largest single expansion in professional sports history.

For the previous 25 years, the NHL consisted of teams from Boston, New York, Chicago, Detroit, Toronto and Montreal. But in 1967, seeking a major TV deal and hoping to stave off the rival Western Hockey League for its talent, the NHL doubled in size to 12 teams.

With new franchises in Pittsburgh, St. Louis, Minneapolis and Oakland – along with media-market powerhouse cities Philadelphia and Los Angeles – the NHL unleashed an explosion of sports arenas that would come to dot the North American landscape over the next half-century, right up to the gleaming, glitzy spectacle that is T-Mobile Arena on the Vegas strip.

With nicknames like the Igloo (shown above) and the Checkerdome – some still standing, most lost to the wrecking ball of history – these six original expansion arenas weave together the most critical chapter of the modern NHL. Here is a look at the six arenas that became the backbone of the new NHL in 1967.

The great irony in Los Angeles is that an arena built for hockey would forever be associated with a basketball team.

Jack Kent Cooke, who owned the Los Angeles Lakers after their move from Minneapolis, sought to bring an NHL franchise to LA when the league announced its intention to expand by six teams for the 1967-68 season. But when Cooke was denied use of the Los Angeles Memorial Sports Arena, he laid the groundwork for his own arena in the Inglewood suburb.

The Forum, which was designed and named in homage to the Roman Forum, opened in late 1967 during the inaugural season of the Los Angeles Kings. The Lakers would also begin play at the Forum and team reached the NBA Finals in each of its their three seasons in the new facility, before dominating the 1980s with Magic Johnson and Kareem Abdul-Jabbar, securing five more titles.

The Kings would prove a middling NHL franchise until 1988, when the team orchestrated the most famous and controversial trade in league history, acquiring Wayne Gretzky from Edmonton. In 1993, led by the Great One, the Kings would reach the Stanley Cup Finals for the only time during their 32-year tenure at the Forum.

Both the Kings and Lakers would leave the Forum for the newly-built Staples Center after the 1999 season, but the Forum still stands, hosting various concerts and awards shows, such as the Nickelodeon Kids’ Choice Awards and the MTV Video Music Awards.

In 50 years of existence, the St. Louis Blues have never won a Stanley Cup. But St. Louis Arena made history in 1968. The Arena was originally built in 1929 and had hosted Chicago Blackhawks games in the 1950s. But when Sid Salomon Jr. won the rights to an expansion franchise for the 1967 season, he bought the arena from the Blackhawks and gave it a major renovation to get it up to NHL standards, adding some 3,000 seats to get capacity to 15,000 for hockey.

And the Blues were a smash hit in their first season, reaching the Stanley Cup Finals in each of their first three seasons, an unheard-of feat for an expansion franchise. But the Blues lost all three finals series, the last to the Bruins in 1970 on Bobby Orr’s famous flying overtime goal in Game 4.

St. Louis Arena would earn a new distinction in the team’s second decade with its re-naming as the “Checkerdome” from 1977-83, after the Blues and the arena were bought by Ralston Purina, famous for its checker-board logo. Purina sold the team after the 1983 season and the new owner returned the name to its original St. Louis Arena. The Blues continued playing there before moving to the new Kiel Center in 1995 and after years of legal wrangling and a failed bid to preserve it, St. Louis Arena was demolished in 1999. Like the Forum in Los Angeles, the Spectrum in Philadelphia was built to accommodate the expansion NHL Flyers, but would also become the home of the existing NBA franchise, the 76ers. But unlike the dynamic in Los Angeles, it would be the hockey team that first experienced championship glory in the new building.

The Spectrum opened in 1967 as part of the South Philadelphia Sports Complex, where such sports facilities as Veterans Stadium, Citizens Bank Park and Lincoln Financial Field would come to be located over the Spectrum’s 42-year existence.

The Flyers would be the first of the six expansion teams to win a Stanley Cup, going back-to-back in 1974 and ’75. The Flyers of that era were renowned for the physical, fighting ways, earning the nickname, “The Broad St. Bullies,” for the address of the Spectrum on one of Philadelphia’s major thoroughfares. Both the Flyers and 76ers would play at the Spectrum until 1996, when a new facility, originally named the CoreStates Center, was built alongside the Spectrum.

Over the next 13 years, the primary tenant of the Spectrum would be the Phantoms of the AHL, as well as an Arena Football League franchise. The Spectrum was finally demolished in 2011.

Built in 1961, the Civic Arena in Pittsburgh was the second-oldest of the six expansion arenas, and would not become an iconic NHL venue until late in its life.

The arena was unique among virtually all North American sports arenas for several reasons during its 50-year history – it is one of the only sporting venues to essentially play a lead character in a major motion picture – but perhaps its most interesting claim to fame is that the building’s design led to the naming of the hockey team.

Because of its circular shape and distinctive retractable dome roof, the Civic Arena quickly picked up the nickname, “The Igloo.” With that in mind, when Pittsburgh was awarded one of the six expansion teams, the inhabitants of the Igloo were named the Penguins.

For its first 20 seasons in the league, the Penguins were probably best known for their arena and less for their play on the ice. But when Mario Lemieux joined the franchise in the 1984-85 season – and after a series of shrewd trades in the early 1990s — the Penguins became Stanley Cup champions in 1991 and ’92.

The 1991 title came against the Minnesota North Stars in the only Finals matchup between two of the six 1967 expansion franchises.

But the Igloo really took center stage in 1995. The Arena had been the backdrop for the cult basketball movie, The Fish That Saved Pittsburgh, in 1979, but it was the 1995 action film, Sudden Death, starring Jean Claude Van Damme, that made the Igloo famous. Nicknamed by fans, “Die Hard at a hockey game,” the movie made the arena itself a critical feature, as the lead character battled terrorists at a Stanley Cup Finals game inside the arena in order to save the kidnapped U.S. Vice President.

The Civic Arena could not be saved when the Penguins re-located to a new facility across the street in 2010. The Igloo came down in 2011. The most popular arena among the six new additions was the Metropolitan Sports Center (known simply as “The Met” or “Met Center”) in the Minneapolis suburb of Bloomington. Built for the North Stars and opened in 1967, the Met was a favorite of fans and players alike for its lighting, sight lines and fast, smooth ice. The Met, like the Oakland-Alameda County Coliseum Arena, which housed the California Golden Seals, lived in the shadow of a dual-purpose NFL/MLB stadium.

Ironically, the Seals would leave Oakland after a decade, make a brief stop in Cleveland, then merge with the North Stars in Minneapolis in 1978. Then the North Stars ushered in the 1990s era of franchise re-location by becoming the Dallas Stars in 1993.

The loss of the North Stars led to the Met’s demise in 1994, making it the facility with the shortest lifespan of the six expansion arenas. 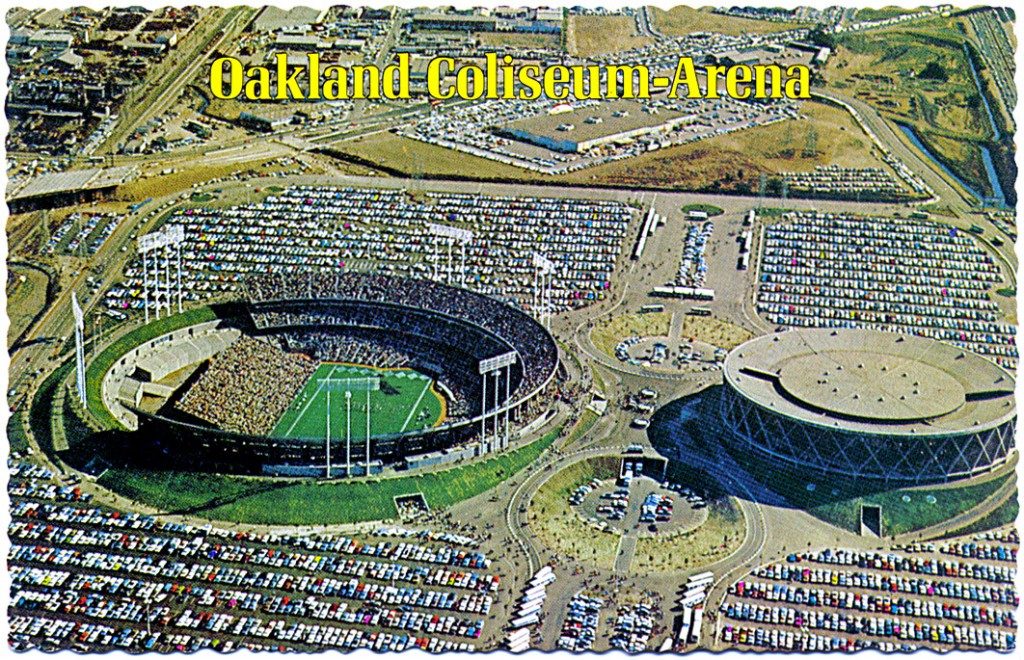 Oracle Arena is one of the only 1967 expansion arena that still stands. And, in the greatest irony of all, it hasn’t hosted an NHL franchise since 1976.

Oakland-Alameda County Coliseum Arena, as it was originally known, was a secondary element to the construction of the Oakland-Alameda County Coliseum, future home of the Oakland Raiders in the AFL and Oakland Athletics in Major League Baseball. Both the Coliseum and arena were ready to open in 1966, in time for Oakland to land one of the six expansion franchises in a coup as it sought to compete financially and culturally with San Francisco across the bay.

The owners of the San Francisco Seals in the Western Hockey League (WHL), a group that included Bing Crosby and John Brodie, were technically awarded the NHL franchise. But the league did not want to put a team into San Francisco’s arena, the Cow Palace, and instead opted to use the newly-completed Oakland-Alameda County Coliseum to house the California Seals.

But the team would last just nine seasons before re-locating to Cleveland. The year before the departure, the Golden State Warriors won the NBA championship, and the basketball team would remain there as the main tenant.