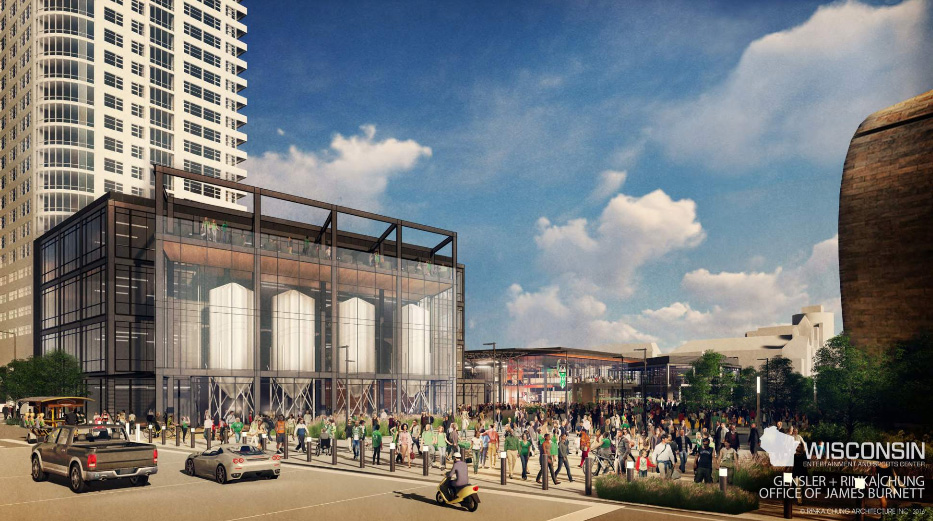 A craft brewery could be part of a Milwaukee Bucks arena entertainment district, as the city’s Plan Commission enthusiastically gives initial approval to the design.

Deer District LLC, the Bucks’ corporation overseeing the entertainment district development, submitted a plan from Rinka Chung Architecture, Gensler and the Office of James Burnett for three buildings encompassing 104,000 square feet east of N. 4th St. between W. Highland and W. Juneau avenues. The buildings would be augmented by a public plaza used year-round. No cost estimate yet on the entertainment district, but construction will be privately financed by the Bucks ownership.

Which means bringing people to the plaza in the summer. Interestingly, the entertainment district should see plenty of action in the winter when the Bucks and the Marquette Golden Eagles bring crowds downtown. It’s the summer that’s the challenge, when there are plenty of other venues (Summerfest, every brewpub in the city with a deck) attracting business. A craft brewery with a large outdoor seating area would certainly be a draw, as would events like live music and a farmers market. And there will be a connection to N. Old World Third St., the location of plenty of other water holes, including the landmark Turner Hall. Despite the fact that these were only conceptual drawings and came with plenty of disclaimers and concerns about value engineering down the road, Plan Commissioners were enthusiastic. From the Milwaukee Journal Sentinel:

“The architecture is beautiful,” said commission member Whitney Gould, who praised the design as transparent, gritty and paying homage to the city’s industrial heritage.

Said commission member Stephanie Bloomingdale, “I’m very, very impressed with the design. I’m excited to see how this is a place where Milwaukee comes together.”