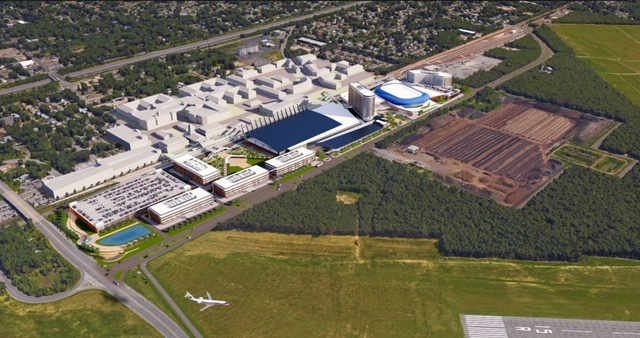 JLL will partner with Hockey Hall of Famer Pat LaFontaine on its Ronkonkoma Vision Project, which includes a 7,500-seat arena that could lure an AHL team.

Ronkonkoma Vision Project is a planned development in Ronkonkoma, NY, with its site located between MacArthur Airport and the Ronkonkoma train station. JLL is serving as the master developer of the project, which is slated to include a 7,500-seat arena, 6,000-seat outdoor stadium, plus surrounding fields, office space, a convention center, hotel, and retail. JLL will partner with LaFontaine–a former New York Islanders, Buffalo Sabres, and New York Rangers center–to develop grassroots athletic programs and help secure an AHL club.

In addition to his efforts to secure an AHL team, LaFontaine will also look to attract women’s professional hockey. He will work to recruit women’s and men’s soccer teams, including a men’s League One, Division III soccer expansion team. Developing a complementary youth sports component, including college and youth hockey, lacrosse, and academy soccer and youth tournaments, will also be on his agenda.

The $1-billion-plus Ronkonkoma Vision Project, located between MacArthur Airport and the Ronkonkoma train station, is envisioned to include a 7,500-seat arena for hockey, lacrosse and entertainment; a 6,000-seat outdoor soccer/lacrosse stadium; three outdoor community practice fields; a convention center; 300-key convention hotel; Class A office with focus on medical and research institutions, and retail.

LaFontaine is a Long Island resident and a former coach for Long Island youth hockey. “We are excited to work with Pat, who brings extensive contacts and deep experience in hockey and youth sports to the development team,” said Derek Trulson, vice chairman with JLL. “Pat will help us bring our vision to life, positioning the project as a sports, entertainment, convention and office destination for Suffolk County and beyond.”

“This project will create a central gathering point for youth and families throughout the Island,” said LaFontaine. “It will be a game changer for Long Island sports, serving community youth every day of the year.”

“Pat has been a tireless advocate for hockey and for youth sports, helping to advance the values we all learn through participation in athletics,” said Bill Daly Deputy Commissioner for the NHL.  “We know that Pat’s new role with the Ronkonkoma Vision Project will not only benefit the sport of hockey, but will also create extraordinary opportunities for Long Island youth.”